The Xiaomi Redmi Note 5 Pro was one of 2018’s best-selling lower mid-range phones. It went on to face contenders from device makers such as Asus, Honor, Realme, HMD Global, and Motorola, but even until November, it was one of the best ~$200 phones to buy. In September, the phone was succeeded by the Xiaomi Redmi Note 6 Pro, which was an incremental update in terms of specifications. This meant that the Redmi Note series risked falling behind competitors such as the Asus ZenFone Max Pro M2. Xiaomi’s answer to this, it seems, has been to expedite its release cycle. Last week, the company spun off its Redmi series as a separate brand, after having launched the POCO sub-brand last year. Since December, Xiaomi has also been teasing the launch of a new phone with a 48MP camera. That phone—the Redmi Note 7—has now been made official in China.

The Redmi Note 7’s announcement comes less than four months after the Redmi Note 6 Pro’s initial announcement in September. In India, the Redmi Note 6 Pro went on sale in late November, which means that the phone has been succeeded incredibly quickly. It’s not just another incremental update, either. The Redmi Note 7 comes with a brand new design that rivals the Honor 8X. It’s powered by a more capable SoC. It has a waterdrop notch. The phone’s USP is the brand-new 48MP primary rear camera. Finally, the Xiaomi Redmi Note 7 switches from the deprecated microUSB port to the modern USB Type-C port with Quick Charge 4. There is a lot more to get into, so let’s start with the specifications list.

Redmi Note 7 – Specifications at a glance 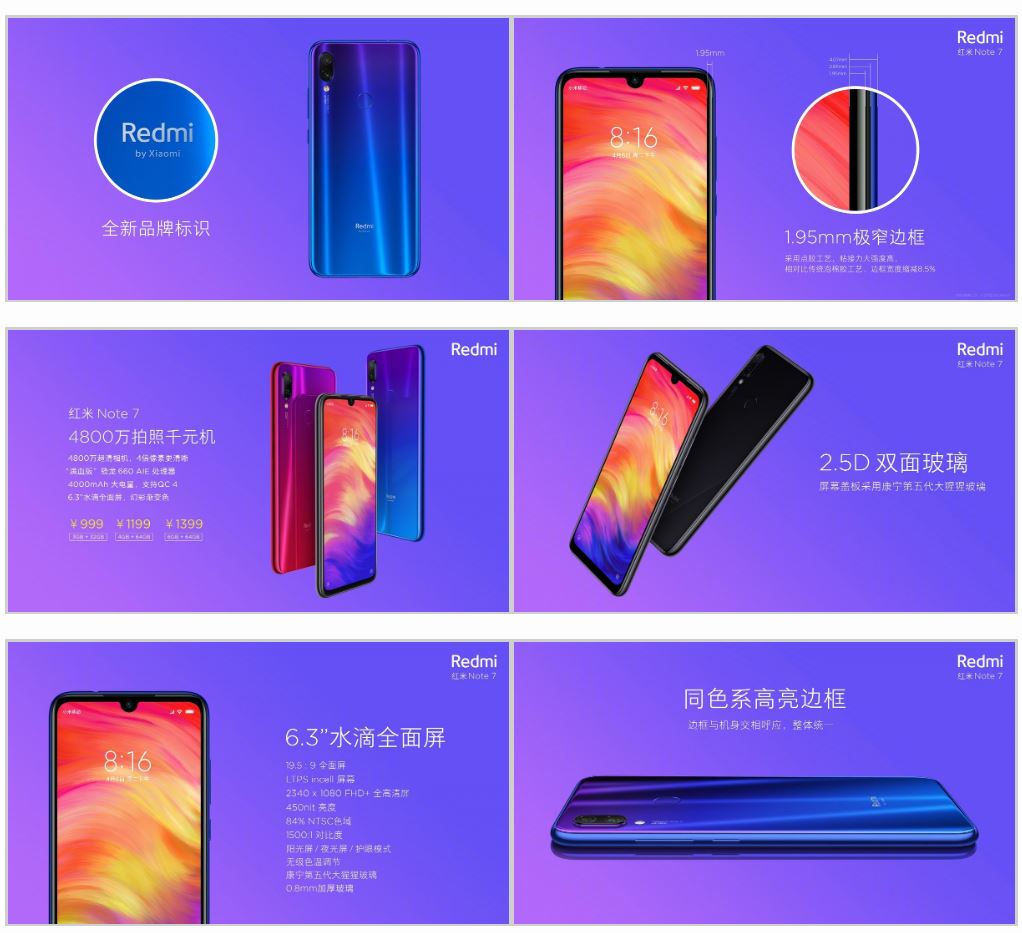 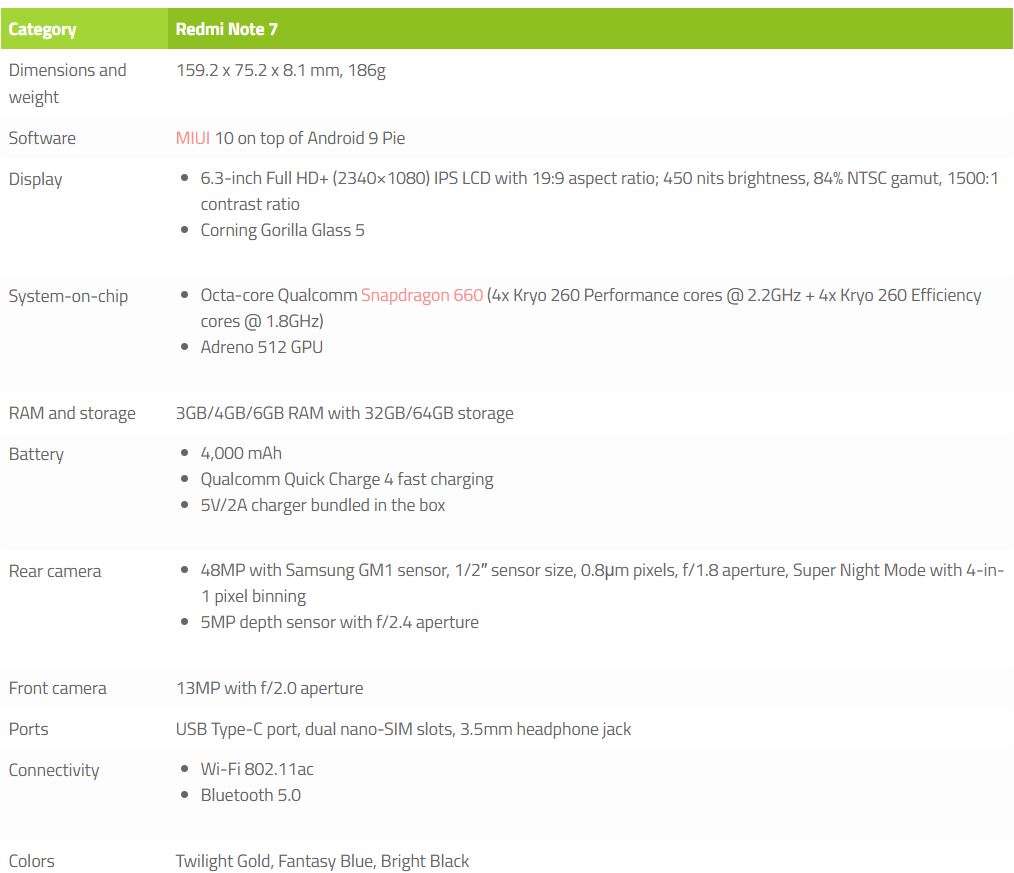 The Redmi Note 7’s design is a drastic departure from previous Redmi Note phones. It has a gradient finish on the back, reminiscent of the Honor 8X. This also means that the phone switches away from a metal back. (It’s unclear for now whether the back is made of glass or glossy plastic.) In terms of aesthetics, the Redmi Note 7 brings a fresh new look to Xiaomi’s best-selling (and market defining) series. 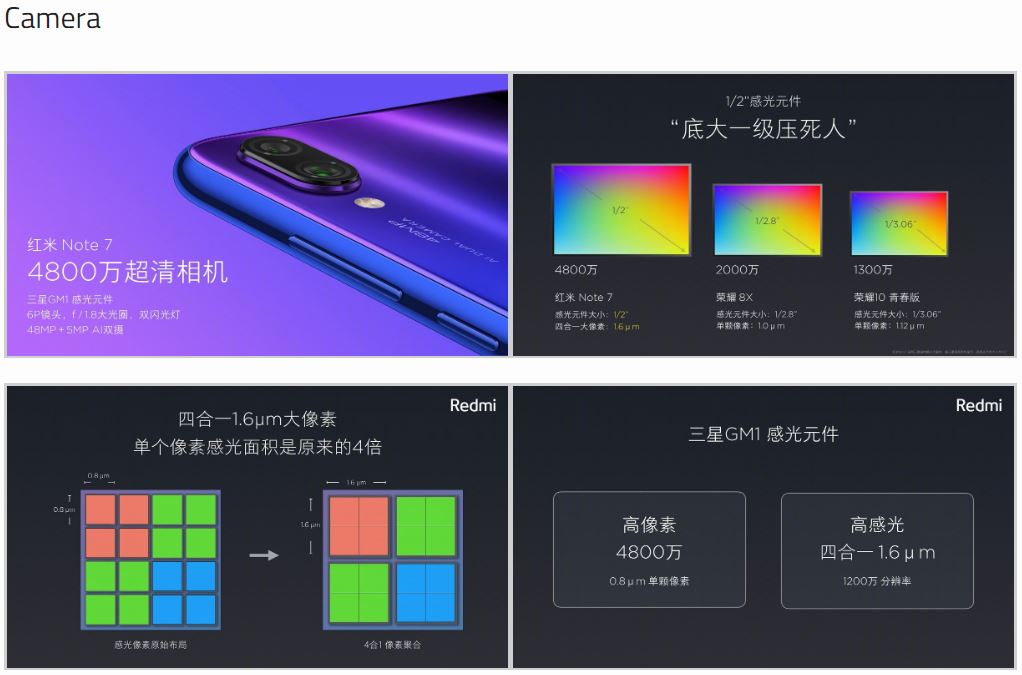 The Redmi Note 7 has a 48MP primary camera. It does not use the Sony IMX586 sensor, though, instead opting to go with an unknown Samsung GM1 sensor. The phone uses a Super Night Mode, which was first introduced in the Xiaomi Mi Mix 3. It has a Quad Bayer filter, similar to the Huawei P20 Pro. In daylight, it uses super resolution techniques to output 48MP photos with 0.8μm pixels. In low light, the phone uses 4-in-1 pixel binning to simulate 1.6μm pixels and take photos with an effective resolution of 12MP. It has a f/1.8 aperture and a relatively huge 1/2″ sensor size. The primary camera is coupled with a 5MP depth sensor.

On the face of it, the rear camera setup looks promising, especially for a phone in the lower mid-range price bracket. The front camera is less impressive on paper. The resolution has been downgraded to 13MP, and the Redmi Note 6 Pro’s depth sensor doesn’t make it to the Redmi Note 7.

India launch is on the cards & Pricing is only the deciding factor. What do you all think about the all new Xiaomi offering? Let me know in the comments below. For fastest tech updates follow us on  Facebook & Twitter.

How to select and invest in the right Crypto Coin/Token