The Huawei employees who were responsible for the tweet quickly deleted it, but a screenshot of the tweet went viral, catching the attention of Huawei executives. 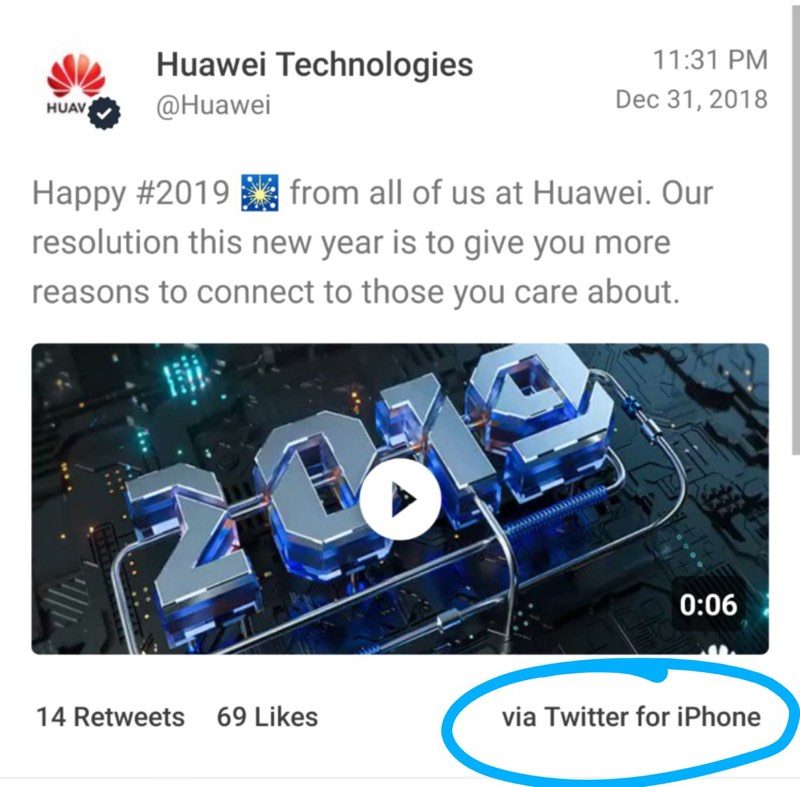 Huawei’s corporate senior vice president and director of the board Chen Lifang sent out a Huawei memo on January 3, announcing punishments for the employees involved. Reuters saw the memo and shared the contents.

According to Lifang, the tweet “caused damage to the Huawei brand,” and occurred when an iPhone was used to send the message after a desktop computer malfunctioned. Huawei felt the accidental tweet “showed procedural incompliance and management oversight.”

The mistake occurred when outsourced social media handler Sapient experienced “VPN problems” with a desktop computer so used an iPhone with a roaming SIM card in order to send the message on time at midnight, Huawei said in the memo.

The two employees who were responsible for the gaffe were demoted by one rank and their monthly salaries were reduced by 5,000 yuan, equivalent to approximately $728. Huawei has also frozen the pay rank of its digital marketing director for 12 months.

This is not the first time that a social media manager for an Android smartphone has tweeted from an iPhone, and it’s something that always catches the attention of users on Twitter and other social networks. Samsung, for example, has had several employees tweet from an iPhone device.

Huawei has also experienced other social media gaffes, such as when Wonder Woman actress and Huawei brand ambassador Gal Gadot posted a paid tweet promoting the Huawei Mate 10 from an iPhone.

In the most Huawei situation, the tweet went viral after being shared by popular YouTuber Marques Brownlee, and it was also widely shared on Chinese social network Weibo.

Things like these need to be taken care of more cautiously. Taking action this way makes the error more known & widespread. What do you guys think? Let us know in the comments below. For fastest tech updated follow us on  Facebook & Twitter.